A Dime-A-Dozen Project: In the Beginning, The Devil Bat - Demon

[Dime-A-Dozen Projects is so named from a conversation with creative friends of mine as we lamented that when we were working full-time for someone else, we get these (in our minds) original million dollar ideas, that would, somehow, turn into "dime-a-dozen" ideas when we were out of work and on our own.]

So where do I start, well, I posted, for a Throwback Thursday, on Facebook, a pre-preview of my Dime-a-Dozen Project on this blog, where I'll be taking my old drawings, characters and concepts and use them to, hopefully, get the creative juices flowing again.   I have ton's of unfinished projects in the form of character sketches, incomplete written outlines, half drawn comic pages, and full illustrations.  You get the idea, a dime-a-dozen idea.  I feeling the need to catalog for my own sanity and for a  simple record to leave my kids, and as I said above, along the way rekindle my creative juice and start drawing again.

First order of business was to figure how to approach this.  I've make a of list of my characters, more or less, but not in any particular order.  So, I'm leaning toward going chronologically so that a I give my least developed, and maybe almost forgotten characters to chance to be seen, again.  I'll try to remember their origin story and what inspired them. 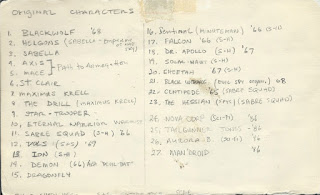 Luckily, I have most of my sketch books from my early teens.  The oldest is a collection of typewriter paper sheets from the summer of 1964, when I was 14 years old.  In scanning the drawings I can see I was reading Marvel Comics by then, as sketches of Spider-Man, Iron Man, and other Marvel characters show up.

Appearing in the first collection a sketches is this character the Devil-Bat. 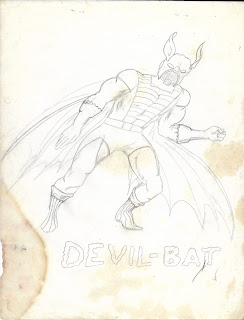 I'm thinking it was inspired by the Jack Kirby monster comics. 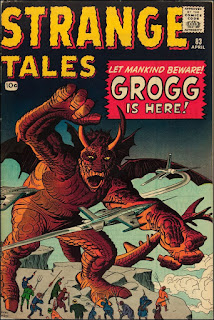 Or maybe, the name is pulled form the old Bela Lugosi movie, "Devil Bat".  They ran those old horror movies on our local TV a lot. 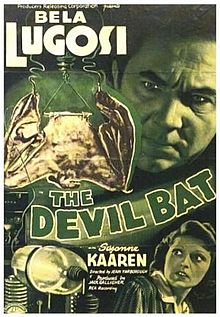 In any case, "The Origin of the Devil-Bat", seems to be one of my first attempts at comic page continuity.  It definitely has the Kirby six panel grid design. The Devil-Bat origin is a simple one, he is an angry, disgruntled, archaeologist who discovers ancient package containing a suit or costume .  In pure comic book fashion, he tries on the garment and activate a buckle, that unleashes the suit's power and transforms him into the Devil-Bat, an ancient demon terror. 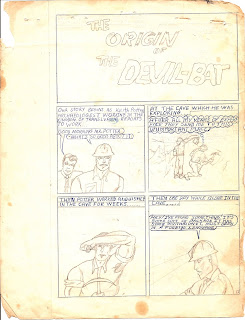 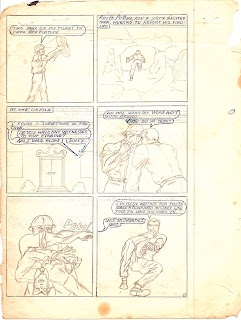 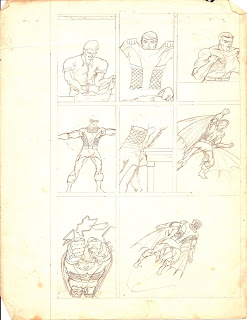 Of course, he plans to use this new found power to seek revenge on his perceived enemies big and small, bringing him to the attention of the Avengers. 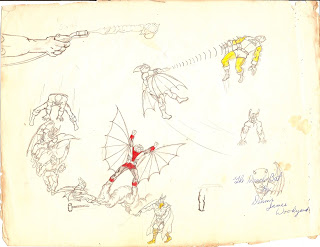 The Devil-Bat has sort sort of sonic blaster that fire from his wrist bands, and smoke screen form his boots.  Of course, he super bat-like sonic sense, echolocation, great for avoiding attackers. 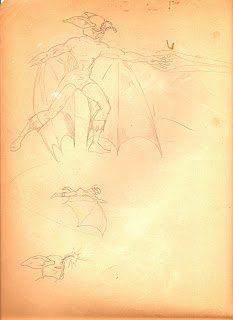 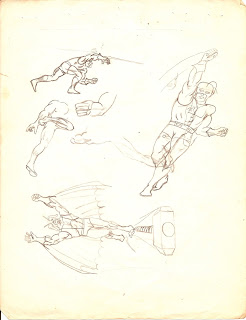 I have no idea who the green bug like character is except a variation of an Marvel Ant-Man. Iron Man and an incomplete Thor is seen on the page. 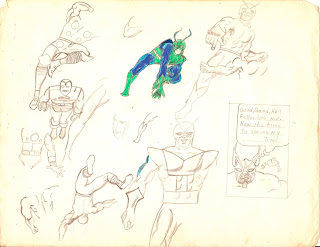 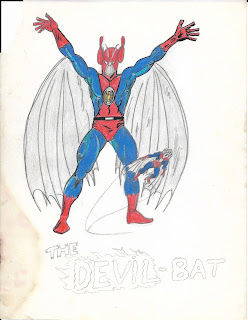 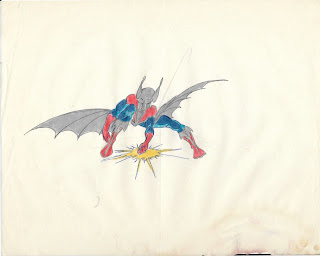 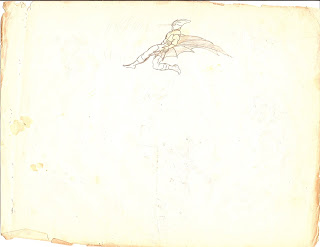 So, at some point, The Devil-Bat became Demon. Not sure, why, except for the streamlined look. 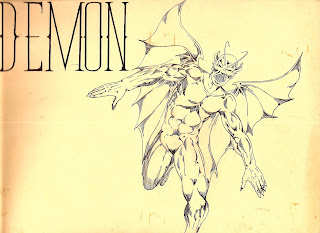 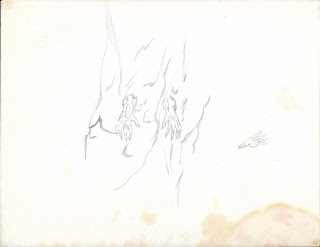 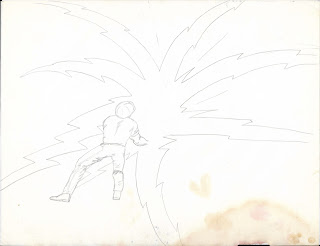 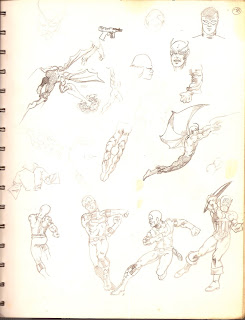 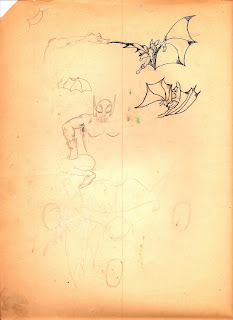 Here's another variation with side attached wings and energy blast.  I have no idea why. These are the last drawing Devil-Bat. 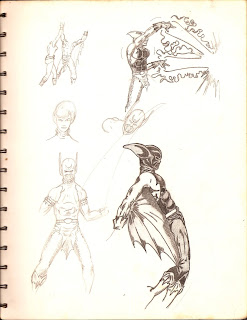 So, that's the first installment of Dime-A-Dozen Projects.  Next up Sabre Squad.
Posted by Dennis J. Woodyard at Thursday, March 02, 2017