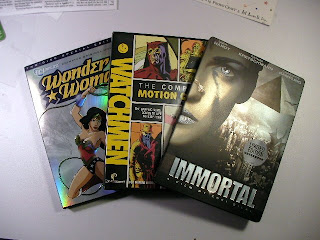 I pick up several DVDs this week. The Wonder Woman animated original movie, Immortal (Limted Edtion), the live action Sci-Fi movie base on the French graphic novel (amazing visuals), and the Watchmen - The Complete Motion Comic, containing all 12 episodes (an added bonus is a movie coupon for $7.50 off the admission price for the theatrial release. That makes it almost free in my area where the theater ticket is $8.00)

I'll just write about the Watchmen DVD first. This is the collection of the shorts that were offered online. I only saw one episode, and not all the way through. So, I'm glad they released the this. "Motion Comic" is the "new" format being hyped my several companies. Us, old-timers, recognize them as updated versions of the first funky "Marvel Comic TV animation" from the 1960's. That said, this animatic style works really well for telling the Watchmen story. It's success, in my opinion, has to with the great Dave Gibbons artwork. Also the audio presentation is more like a audio book, one narrator, doing all the voices. I'm enjoying this limited animation version very much. Today's graphic/video editing technology has may the type of animation very appropriate for the right project. It will be interesting to see this "Motion Comic" concept develop.

Another great example of the style, actually pre-dates the Watchmen stuff. (I mentioned this before) It is the Metal Gear Solid - Digital Graphic Novel released for the PSP Playstation Portable in 2006. It adapts IDW Publishing MGS comics with artwork my Ashley Wood but it was only release for UMD, PSP format only. Sony would be wise to dump it to DVD and Blu-Ray. You could probably download it from the Playstation Network, but a hard copy wouldn't hurt.

By the way, this is a format I proposed to Dark Horse and Valiant Comic back in 1990's and I used for my own Warrior in the Mist Comic/Video/flip book project. I called it Comic Book/ Video Adaptations. Okay, that tagline is a little long winded. Magus Robot Hunter Promo, Dr. Solar Valiant Promo, Paul Chadwick's Concrete Comix Flipz, and are all samples of my Comic / Video Adaptation concept. Look like early "Motion Comics" to me.

Looking back, I'm starting to think I'm a neither a f**kin' genius, ahead of his time, or the worse salesman ever. I can only hope my Dragonfly Flipz book format take off, under my stewardship and not ten year down by somebody else, with "new" name. Such is creative life.

The Wonder Woman DVD leaves me with mixed feelings. It's a solid presentation on par with the Superman and Justice League: New Frontier DVDs. I won't go into the full back story here. You can go to DC / Warners Bros. official web site for that. The PG-13 rating not withstanding, it still comes off rather tame for the subject matter. The staging of the battle scenes are good, but missing convincing punch even for animation. There plenty of sword play, but the lack of blood letting is oddly apparent. Looks like they self-censored themselves too, much. The style's TV animation roots are plainly visible, and that may be the root of the problem, for me. I'm a little tire of seeing this super hero styling. In stark contrast, check out HIghlander: The search for Vengeance, directed by Yoshiaki Kawajiri produce by Manga Video (part of Starz Media), Both stories have simuliar elements, flashbacks, big battle scenes, but the action scenes in the Highlander DVD are amazing. So, if I have to rate it, I'd give the Wonder Woman DVD a B-.

The Immortal DVD is another beast, altogether. It is a amazing blend of CGI animtion and live action and total blend. Live actor and CGI characters populate this visually rich adaptation of the graphic novels by director Enki Bilal, "The Carnival of the Immortals and the "The Woman Trap" Les Humanoides Asscies. Here's the story line (From the back cover text) "New York City, year 2095. A floting pyramid has emerged u in the skies above Manhattan, inhabited by ancient Egyptian Gods. The have cast judgement down on upon Horus (a falcon headed god), one of their own. With only seven days to preserve his immortality, he must find a human to inhabit, and search for a mate." That just scratches the surface of this stunning film. I remember seeing his work in the U.S. editions of the Heavy Metal Magazine and hardcover graphic novels. Thisis great stuff, but definitely for a mature audience, in a good way. In checking the imdb.com, Enki Bilal has several other films to his credit. I'll be sure check those out some time.
Posted by Dennis J. Woodyard at Wednesday, March 11, 2009 No comments: