I added another link to the work of a very talented artist, Simon Rodgers. Simon is great background artist, and more, just check out his gallery on his blog.

We worked together at Warner Bros. awhile back. While there, we booth have comic art published in a Komikwerks anthology (published by Shannon Denton, who worked with us, also). I'm looking forward to seeing Simon's personal projects, especially his comic property, Lightspeed Delivery. It's a lot of fun. 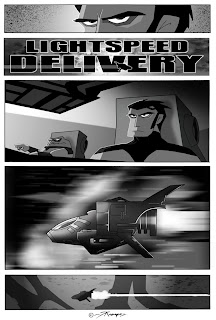 I purchased the Afro Samurai - Director's Cut DVD set, this weekend. Only after I got it home did I realize it not being released until next week, tuesday, May 22. I've actually, just by plain dumb luck, have a mini-media scoop! (Well...you can see the DVD set on the Afro Samurai web site.)

In any case, I haven't viewed the animation, yet (I'm looking forward to doing so, since I missed some of the later episodes), but the the packaging is just excellent.
The box is a heavy cardboard with a magnetic lock, printed on textured coated paper stock like a high quality hard back book. The interior of the fold out panels features original artwork by the Takashi Okazaki, Afro Samurai's creator.

Funimation Entertainment did a great job with this package. I have a Samurai 7 anime series DVD box set they did which include mini storyboard books. So, they really know how to present their releases.

Here's a couple of images of the cool Afro Samurai fold-out box. (Click on the images for larger views)

With the plastic type cover: 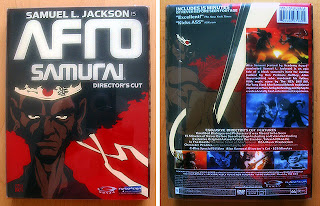 Minus the plastic type cover. 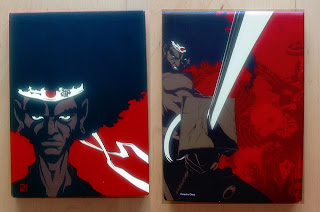 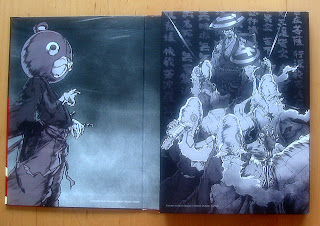 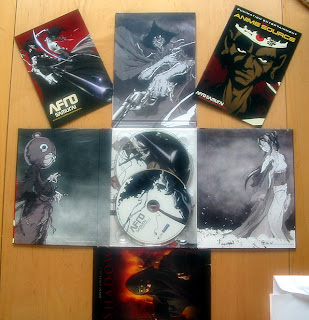 Again this is a cool package, well worth picking up. But, be advised the content of the series is rated "Mature", definitely not for the kiddies.

In case you missed it here my Dragonfly Flipz Book (concept demo) of the "First Fight" sequence from Afro Samurai I posted on Gametrailors.com. 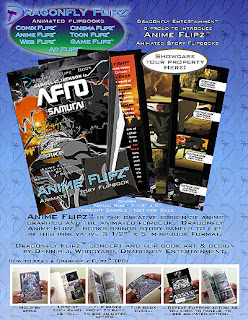 I hope to interest Funimation, SpikeTV and Gonzo in my Anime Flipz book for the next Afro Samurai series or other properties. Time will tell.

Wow, I just wanted to thank all the people who have watched and commented on my Dragonfly Flipz Book movies online. It really has inspired me to keep at it, making them, and trying to get them mass produced.

Any way, here's the my top ten list of my movies based on your viewings counts from Gametrailers.com (GT), Youtube.com (YT)and Combined (Total) 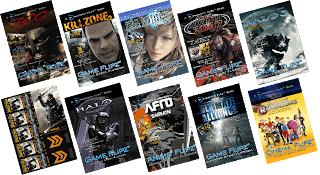 (I resisted the temptation to embed all ten video in this post, so you lazy guys will have to visit my User Movies pages on Gametrailer.com and Youtube.com to view them. Follow the links at the right)

For different reasons, my top three favorites are "Killzone 2", "Unreal 07", and "300 the Movie". The Killzone 2 Flipz book was the first I used my comic page / flip book page format which really opened up all kinds of possibities and uses for my flip books. The Unreal 07 flipz book is just such a cool, dynamic, trailer, the flip book just had to be made. The '300 the Movie" flip was again done because the trailer movie is so cool and I loved the Frank Miller comic (BTW - I keep forgetting to upload my Sin City Cinema Flipz book. I'll have to do that this week). My next favorites are Final Fantasy XIII and Marvel Utimate Alliance. The FFXIII flipz book was the first I introduced the art gallery pages in, which will now be a standard feature of my books. Meet the Robinson and Afro Samurai are my most ambitious as far as page count, 144 and 200 pages respectively.

Many GT viewers have asked about buying my books. Out of respect for creators of all these properties (I'll work in the creative arts (animation)and wouldn't want someone bootlegging my stuff. Plus, I wouldn't want to be sued by some like Sony), I'm not selling these on Ebay or privately ( I was offer $530.00 for Halo 3 Flipz book from a guy who saw it on Youtube, I declined). I'm still hoping to interest the game nad movie companies into letting me make and sell them. I've contacted several and I get some response but things seem to fall by the wayside.

So, I asking for your help. If you'd like to see your favorite game or movie trailers become flip books, write the game companies, Bungie, Square-Enix, Epic, Sony, Microsoft. and others. My Flipz book would be a great item for their online stores. Down the line, I'm open to talk about a royalty arrangement. I'd pay for for production, I just need the permission from the property owners for use of the trailer videos.

Thanks, again, for your support. No matter what, I'll keep making more Dragonfly Flipz books movies, if you keep watching them I promise.

Finally, I restored the Links section. Be sure to check them out again, there are some interesting artists sites listed.
Posted by Dennis J. Woodyard at Tuesday, May 08, 2007 No comments:

Here's another ancient item from my unseen art archives. It's something for all the Valiant Comic fans. This is Promo I did for a presentation to Valiant Comics, back in 1992(?).

Valiant Comic was a company started by Jim Shooter after leaving Marvel Comics. Valiant was a going great guns for awhile, then internal problems and a shift in the comic business cause it to crash and burn. It featured a good mix or updated chassic Gold Key Comic characters from the 1950's and '60's, like Magus the Robot Fighter, Doctor Solar, and Turok, Dinosaur Hunter and an interesting line-up of original properties, Eternal Warrior, X-O Man of War, Bloodshot, Harbingers and others. Turok actually have several video games made from it.

This short promo was done on an Amiga 2000 computer with the old Deluxe Paint animation program. The original art by Art Nichols (fist smashing through the robot head) was drawing from a Valiant party announcement. I added the beginning and inbetween action art and ending. It's crude by todays standards, but still fun.
Enjoy.

You may have noticed my Links listing in missing. Plain truth is I deleted them by accident. I was trying to correct a bad link, but trashed the whole section instead. Not to worry I'll rebuild it soon.