While doing a google search for flip book (of course), I came across this great French web site with lot of interesting info on flip books. The really great thing is it's has an English version, also. Be sure to check out all the sections, especially the history and links sections. I'm adding them to my links and I've contacted them to see if my Dragonfly Flipz books can be included in their links.

I was floored to see a picture from 1911, that looks like my Dragonfly Flipz format, but the pages were cut into sections. It's a fun site, I'll be spending a lot of time there.
Posted by Dennis J. Woodyard at Thursday, June 21, 2007 1 comment:

Here's the CGI opening for the Transformers game based on the new movie. I have to say this game looks interesting. I don't know who did the CGI work, but it's first rate (I see another Dragonfly Game Flipz book demo in your future). Do yourself a favor a view the HD version on Gametrailer.com, that's the one I'll use for my flip book.

Finally, I got a chance to finish and post my new StarCraft 2 Game Flipz movie. I really like the way it came out.

The StarCraft 2 trailer about 4 1.2 minutes long (scroll down to view it from the earlier post). That's over 16,200 video frames (at 30 frs/sec), so getting it down to 641 frames and 172 pages was a real challenge. I did two different covers, the first was a montage of screen shot from the trailer, the second was done using a desktop pic offered on Blizzard Enterainment's StarCraft 2 web site. I added some concept art and character info screens from the Official Blizzard StarCraft 2 site. (click on the image for larger view) 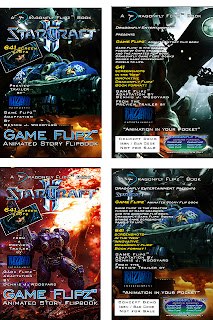 I tried to add some improvements to the video presentation, but I know there're not fully sucessful. My focus is a little soft, sorry (I think the auto focus gets confused by the page flipping. I'll try manual focus next time). I tried cut to tighter shots for the flipping action to give everyone a better look at that. Hope you liked it.

I'm going to send a couple of copies to Blizzard and see if I can produce them for all the StarCraft fans. As usual, your comment and suggestions are welcomed.

I did a second Dragonfly Flipz (Toon Flipz)this past week for another all time fan favorite preview trailer. But, I want to sent it to the creators company first to get their reaction, if possible, before posting it. Keep checking in, it's a knock out.

"So, my kids drags me to Target to get themselves a video game and SuperSoaker.

Ooo-My-God!!! Here's the biggest water Blaster (gun?) I've ever seen! The AQUASHOCK HYDROBLITZ !!! It's BFG (Big F***ing Gun from the video game Doom) of SuperSoaker set. This brute is about 2 1/2 feet long and weights about 3 lbs, empty! It holds a gallon and a half of water! 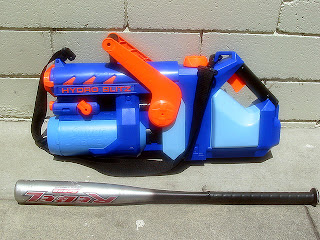 (It's not one my son wanted, thank goodness - Whew)
I realize the water guns have advanced in the last ten years or so, but, you could put out a building fire with this thing.

But, five minutes after the leaving the store, I wanted one, just for the sheer silliness of it. It will make a great prop for the sci-fi short, "The Backyard Arms Race", (feel free to use the idea,guys),at least that what I'll tell my wife, when I buy it.

I'll keep you posted, and watch your back this summer, your kid might be behind you with this monster."

Well, since I posted the above, I did buy the Hydroblitz for my other son, who loves it. He took it to his little league team's end of the season pool party and all jaws dropped when he entered. A new level of water armament had been reached. They loved it! The kids had a "Blast" in more way than one.

Just for fun, I searched on youtube and find this video profile on the inventor of the Super Soaker, Lonnie Johnson, an Aerospace Engineer from Los Angeles, California. I think it's very inspiring, and plan to share it with my kids to show how a using your brain doesn't mean you can't do something fun. Note how long it took to get a company interested in making to his invention. There has to be a lot of former toy executives kicking themselves for passing on this idea.

Thank, Mr. Johnson, summer would not have been as much fun without your invention.
Posted by Dennis J. Woodyard at Monday, June 11, 2007 No comments: 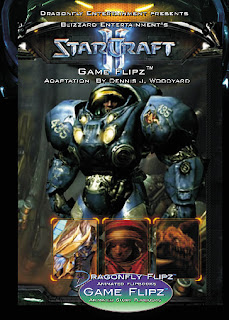 This cool game trailer for the Starcraft 2 computer game was released last week or so. The original Starcraft is huge gaming favorite, especially in Korea where they have massive following, including TV coverage of tournament with big cash prizes. I had only play a demo of the first game, but I always liked the premise of the game. It's one of the few mega-game hits that are also available for the Mac. So, this weekend I picked up a box set, Starcraft - Battle Chest, which includes the original game and two expansion pack, and two strategy guides. A nice buy for only $9. So, now Starcraft will be added to my list unplayed or unfinished games, oh well.
Also Blizzard, the game developer, had some great trailers for their other other great game World of Warcraft.

Check out this this trailer:

I was so inspired by the Starcraft 2 trailer, I've started a Dragonfly Game Flipz book of it. Here's the first comic pages before the flip book action starts. I will have it finished in a week or so and post a movie of it. as always.
(Click on the image for larger view) 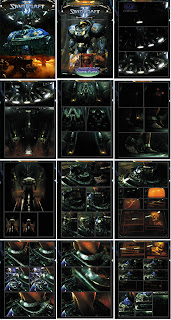 It seems Warner Bros picked up a option for a live action Thundercats movie. The idea of animated series has been knocked around (I was actually tapped to be a director on one of the attempts that fell by the wayside). This will make a lot of TCats fans happy, but time will tell if it ever makes it to the big screen. If it does, maybe the animated series will rise again.

Here's a live-action fan movie I just found on Youtube. It fun and well done.

I worked on the original Rankin/Bass series as Art director and secondary character designer, on the last thirty shows. I got to write two of the episodes, "Shadowmaster" and "Well of Doubt", (no...I don't get any money from the DVD's releases. So, don't ask!) I have some of the artwork on my website. Here's a couple of them below. 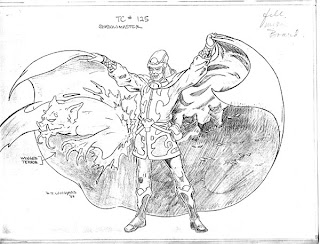 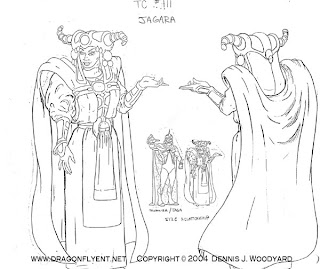 Thundercat still remains my favorite work experience. I'm happy to say I'm still in touch with the good friends I made at Rankin /Bass.

This interesting Youtube movie, "Women in Art", was send to me by a dear friend. She, and others, had some reservations about the lack of pictures featuring "women of color". Here's part of my reply: "I like it lot...I wouldn't get too blown out of shape about the lack of "woman of color" in the piece. I just enjoyed it at "face value" (...horrible pun, intended). If, it had be titled "Women in Western (or European) Art", it may not have received so much flack. In any case, it leaves the option open for other films to feature various other cultures and art. In instead of knocking the artist, who by viewing his other film, like "One World", seems to have his heart and mind in the right place, those who find the piece lacking should just... do their own film."

View it for yourself and enjoy