Here's a Dragonfly Cinema Flipz book of Fritz Lang's Metropolis, the classic 1927 silent movie. It one of my favorite movies, for the great iconic images in it. You can definitely see the inspiration for Star War's C3PO in the "Maria" Robot.


I did this a several years back using images from a funky, low quality, budget VHS tape. Since then, a really great digital re-mastered, restored authorized edition was released by Kino Video on DVD in 2002. I did a second mini-book Cinema Flipz of scenes from the DVD. (See the book below) I'll have to make a movie of it soon and share it with everyone. 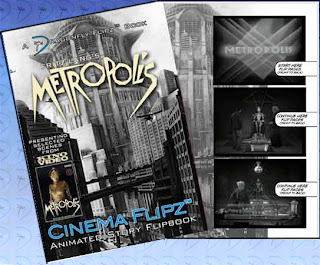 I hope to interest Kino Video in letting me do Dragonfly Cinema Flipz book of their great video releases, especially their silent movie catalog. I think it would be a nice way to introduce these films to a new young movie lovers. I'll keep you posted.

The good guys at Nerf Haven have unveiled a new Nerf Blaster from Harbro. Here's a peek. It seems it will be released next spring.

There's some debate about the size, below is my estimate in comparison to the LongShot. 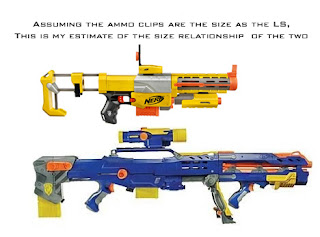 Just for fun, I'll be presenting my own thoughts on the future of "Nerf War", soon. Here's the cover (not final) preview image: 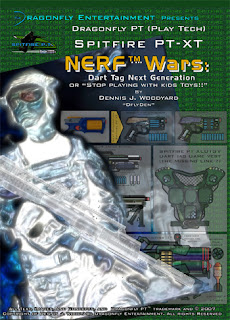 I'm still editing the text. I hope to have it done soon. It should make for some lively "nerd" debate on NerfHaven. Be sure to join in.
Posted by Dennis J. Woodyard at Saturday, October 27, 2007 2 comments: 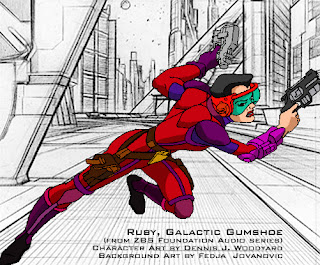 This past week I ordered, and recieved, the latest installment of one of my favorite Sci-Fi characters, Ruby, the Galactic Gumshoe. You may not have heard of Ruby, she's the main character in a series of audio adventures, basically "radio plays" produced by ZBS Foundation since the early 80's. Here's how I described her in a pitch outline I prepared awhile ago (more on that later):

Ruby, Galactic Gumshoe, follows the adventures of a “smart, saucy, and sassy” futuristic detective on the planet Summa Null in the 25th century. In this ultra modern setting of media overkill and out of control commercialization, Ruby, Galactic Gumshoe, accompanied by the eccentric archaeologist, T.J. Teru, and the lovable thief Rodant Kapoor (pronounced Roe-dent), weaves her way through a bizarre mix of hi-tech, mystical and humorous adventures.

Ruby’s world is laced with fantastic locations such as Magnifico, the City of Malls, Kismet, the inflatable nomadic city, and populated with a kaleidoscope of offbeat characters. These include Angel Lips, a sexy android. Moliere, chief of the “pun” loving Mole People, who love to dance the tango. Monet, an Aurorean, a race that “lives for aesthetics”. And/Or, the “techie” from the Digital Circus, an renegade underground performance group. And many, many, more.

In her trusty “talking” air car, Mustapha, Ruby navigates across a vibrant world of Scuzzies (cyber-punks), Slimeys (genetically engineered assassins) and a host of other alien oddball characters. Case after case finds Ruby matching wits with Techo Witches, Zoot Mutants and “dark forces” from this and “other” dimensions fighting for the hearts, minds, souls, and pocket books of the masses.


Ruby is “one tough cookie”. Self-confident and independent, she’s a neo-classic gum shoe, like a Sam Spade meets Han Solo in a female form. Highly intelligent and resourceful, Ruby is still basically a woman of action. Armed with her sharp mind and rapier wit, Ruby is more than a match for any human or alien foe who crosses her path. But Ruby also possesses a special gift; she can slow down time. This comes in handy when you need to dodge a laser blast or the swing of a bad guy’s energy-blade, allowing her to sidestep danger and returns the favor with a blast from her “Smith-Asahi Godzilla Blaster” with a signature response, “here’s a kiss for ya”.

All this is great stuff! ZBS Foundation has produce tons of Ruby stories, the last being Ruby 7, and other original productions. I started buying Ruby adventure on audio cassettes and immediately fell in love with them. So much so, that I tried to get the rights to produce an animated series, and I actually did secure the animation rights for about two years. But, as luck would have it I couldn't get the project sold. The first Ruby audio series was done as two minute episodes which actually aired on public radio, during rush hour drive time. I thought they were perfect for webisodes. I pitched them as such, at the height of the Web 1.0 crash. Bad timing on my part. I remember my last pitch meeting was the day after "9/11". Needless to say a lot of projects faded away at that time. My Ruby was one of them. So, the animation rights are now in the hand of other producer. But I still hold out that I'll get another chance. (Just for record, I haven't seen one bit of info from the other guy in the two years he's had the rights. I'm hoping no news is good news, because I think ZBS's Ruby deserves to be out there, even if I'm not the one doing it.) ZBS is one of my inspiring, creative heroes, so, please visit ZBS Foundation website for more info, and support them by buying their stuff.
Here's the animatic I did for my Ruby animated series pitch. It's an adaptation of the first audio episode. This is the first time it is being shown online, although the storyboard has been on my website for several years. I just never got around to posting the animatic. With picking up the latest adventure, I decided, why not! By the way, I also did a series of Dragonfly Flipz books of this short. If, I ever get the chance, I'll print that up someday. (By the way, ZBS and the media right owner has a copy of this animatic and flip books, just for the record)

Some time after finishing on the Ruby pitch I came across this other Ruby, " Ruby, the Assassin" featured in demos for ATI graphic card. I be curious to know if these guys knew of the ZBS "Ruby". The episodes are very well and worth checking out.

I thought of approaching ATI and seeing if they'd be interested in having Dragonfly Flipz book adaptations done of the episodes. I still might do that.

Just to add to the mix, here's a third "Ruby" or Rubi. This Rubi is the lead character in a new video game coming out next year called "Wet". It looks interesting in "Kill Bill, kind of way. I don't know much about it, but the trailer looked cool. (Warning: Mature content)

Three Rubys for the price of one.

Congratulations to the winning bidders of the Dragonfly Game Flipz book auctions on Ebay. Four of the five books went to a buyer in France, and remaining one to a U.S. buyer. Thanks to everyone that joined the bidding.

I'm preparing a updated and revised edition of the Superman Toon Flipz book for printing and sale, soon. I'll keep everyone posted.

After moving from LA to Upstate New York, I unpacked and set up my work space. As I sorted through my Dragonfly Flipz book demos, I realized "man, I got a lot of these flip books", and for various reasons they're just sitting here collecting dust. Let's face it, I've been posting my Dragonfly Game Flipz movies on Gametrailers and Youtube, for over a year, now, contacting the game companies by sending emails and sample books, and the results have been luke-warm to no comment what so ever. Either it's a dumb idea (like the flip book is too low-tech for them) or they just don't get it. But, the views counts tell the fans "get it". So maybe it's time to move on, or at least try a different plan. I'll be cutting back on the Game Flipz book for awhile to concentrate other Dragonfly Flipz books that I can produce directly.

But, to thank all the viewers who have been soon inspiring, I've made a few of the Game Flipz boks available on EBay this week. A single copy, and only a single copy, of the Halo 3, Final Fantasy XIII, Killzone 2 (2005), and the Unreal Tournament 2007 Game Flip books will be on auction.

When I did my demo books I usually printed a gang up of 4 books. When I finished a group, I'd video a copy for my Game Flipz movie (so technically the book in the movie is still not for sale, if any one cares). A second copy was sent to the game developer with a proposal letter. So, I alway have 2 or three copies on file. I have given copies people as gifts or to perspective business contacts at conventions. For example, Geoff Keighley, who hosts the Game Head show for SpikeTV and shows here on Gametrailers.com has a copy of the Killzone 3 (2007) Game Flipz Book, one of my latest, the I gave to him at the San Diego Comic Con last July. Kevin Pereira of G4TV has a copy of a small Halo flipbook (Dude!...look in your sock draw, the damn thing is a collector's item!) Not one word from any of them, I know all these guys are busy, but...what's a guy have to do to get a response. So, it time to re-group.

So, if you interested owning Dragonfly Flipz book before the general world discovers these little gems, click om my Dragonfly Emporium link and check out the auctions. And if you can pass the word on to friends, please do so.


Thanks, again.
Posted by Dennis J. Woodyard at Saturday, October 13, 2007 No comments:

My good friend, Larry Houston, sent me this article from Variety, the entertainment daily. It seems video game veteran Jerry O'Flaherty, art director of Gear of Wars and Unreal tournament will direct the CGI movie of the Thundercats , the classic Rankin and Bass cartoon from the '80's. Since I like the art direction of Gears and Unreal, I'll be looking forward to seeing what he does with the T'Cats. Actually, the reason Larry sent me the article(as I've mentioned before) is that I worked on the original series, (yes, I'm that old). I was the art director for the last season and designed the secondary characters for the last thirty shows and wrote two of them "Shadowmaster" and "Well Of Doubt" (you can check them out on Season 2 - Volume 2 of the Thundercats DVD set).

I hope they bring back the Shadowmaster. It would be fun to see my character on the big screen.

Larry Houston is a very talented animation producer/director with tons of credits, including the early X-men animated series. Please look him up and bug him to start a blog or website. He definitely has a lot to share with everyone. 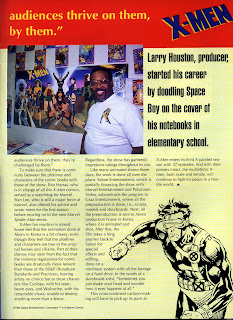