Happy Father's Day to all dad of all kind, shapes, and sizing.  All the best, on this Sunday Music Muse Day.  My buddy Rodney Mean shared a concert video of a version of the super charged acoustic Guitar Trio of John McLaughlin, Larry Coryell, and Paco DeLucia from 1979.  I inspired me to pulled a two albums with Al Di Meola, which I think was the original lineup and the on that recorded and toured in the U.S.  :The Friday Night In San Francisco - Live, (1981) and Passion Grace & Fire.  and later The Guitar Trio CD (1996) I remember attending a NYC concert with McLaughlin, Di Meola, and De Lucia, probably about the late 70s. The blazing speed and shear barrage of notes never seem to diminish the high quality of the music. 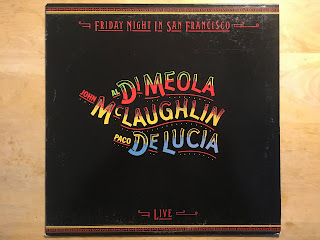 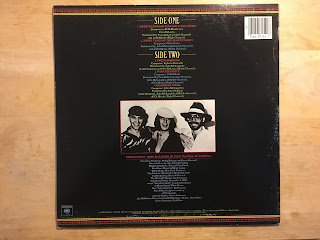 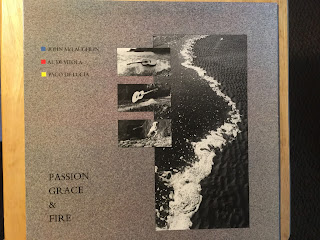 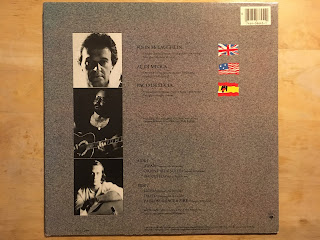 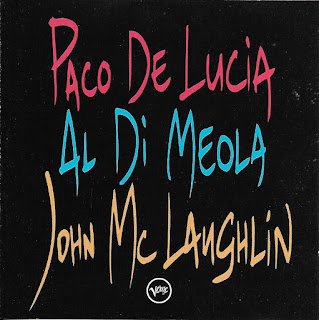 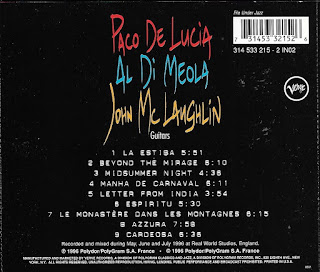 Keeping with theme of Father's Day, here's a song about children. (Actually another (embarrassing) attempt to clear the backlog of undeveloped and unfinished music ideas.) "Flowers" is an original tune written by friend Peter Grosett back in 1982. Peter and I met at the Guitar Center in NYC, where we were taking lessons and started practicing. Peter was pursuing a career in Jazz guitar, and I was just trying to justify having a guitar. He was always a more accomplished player than I, but somehow we clicked and we liked playing together. We even did a couple of pay-for-tips gigs a East Village cafe, La Figero, and at an uptown venue. One of the joys of playing with Peter was his sharing his original tunes. "Flower; was actually performed in public, vocals and all. (There is reel-to-reel of it I need to transfer before it rots) As part of my Dragonfly Views blog I have a Sunday Music Muse Day post where I always hoped to present original music that I had filed away mostly unfinished and unheard, always putting it off because my playing leaves much to desired. But as I get older it becomes apparent waiting for perfect has become an excuse not to do anything. But, sometimes you just have to get things out of your system. So, rough edges and all here is the song, "Flowers". I hope it give a hints of the good song Peter wrote. This backing track was created in Band in a Box music software. You write in chords and a lead line and it creates a backing track and even a solo performance, with varying degrees of success. I admit the version came out more "smooth jazz" than I would like, and BIAB sound can be clunky and rough, but thats Jazz.

Peter and I are still in touch and his creative paths has turned to photography. I'm glad I was able to incorporate one of photo in this video. I hope my Peter like it as a tribute to his all around creative spirit. old and new. Enjoy
Posted by Dennis J. Woodyard at Sunday, June 21, 2020