Comic Book /Video Adaptations was my attempt at what as come to called "Motion Comics", done back in 1991 when computer graphic and computer based editing was just starting. My inspiration was the low budget limited animation TV show of my youth (1960s), Space Angel, Clutch Cargo and the early Marvel Comic TV series that used actually art work of jack Kirby and other artists. 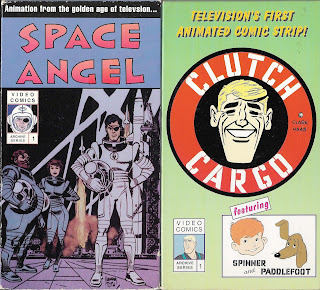 I love the art of Alex Toth on Space Angel, although I didn't know his name at the time as I watched as a kid. I remember making hand drawn flipbooks and drawing cut-away diagrams of the Starduster spaceship, 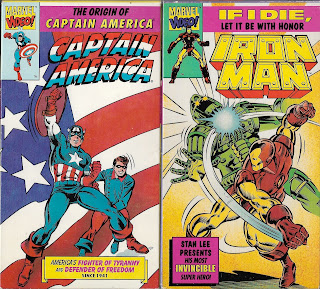 The first Marvel Comic TV show had a special appeal to me, as they featured the same art I was seeing in my comics at the time.   Other superhero animated shows, although better quality always looked so tame compared the comic book art. It would take decades for the TV animation to get it with Batman: The Animated Series, and X-Men.

My concept was to blend my love animation with my renewed interest in comics after putting comic aside for several years before (late '70's).  While working on the Adventures of the Galaxy Ranger in the mid-80s, my younger co-workers introduced me to the new independent creator-owner comics like Steve Rude's Nexus, and Paul Chadwick's Concrete.  I planed to interest companies like Dark Horse in doing video promos for their comic convention booth, and the longer form videos, for VHS sales.  I actually had contacted Dark Horse and sent them a proposal, with a budget, but nothing happen with. But, that wasn't the last dealing with Dark Horse, I contacted they again for my Dragonfly Flipz Books project, the subject of a future Dime-A-Dozen Project blog.

I choose a story of Paul Chadwick's Concrete as my first attempt. I was a big fan of Paul's work in Dark Horse Presents and the Concrete titled comics DH published during the B&W indie publishing craze of the mid-80s. 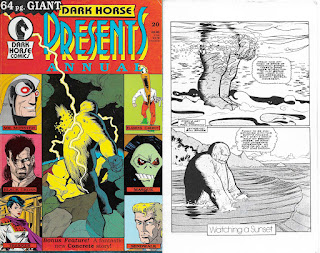 "Watching a Sunset" simple graphic presentation seem prefect for animation. My Comic Book / Video Adaptations were done on my Amiga 2000 computer, by using a hand scanner to digitize the comic book panels into Deluxe Paint, an early digital paint and animation program. The color palate was limited to 64 colors. I remember doing the color still shots first, and liking the way they came out, I tried animate shot of Concrete walking underwater and like that, too, So, I committed to doing the whole story. Of course, I never fully finished the coloring, not sure why.

Warrior in the Mist (Eternal Warrior)

Warrior in the Mist video was featured in my DIme-A-Dozen Project #14. The version in the post features the original planned introduction text crawl. The quote seem to fit with the "Eternal Warrior" title better than the "Warrior in the Mist" title, so I cut it from the Warrior final video.

The Valiant Comic Promo was attempt to offer my Comic Book / Video Adaptation for comic con use.  I had worked on several Valiant Nintendo comics, and made my promo based on ads for the Valiant relaunched Gold Key comic characters Magus Robot Fighters and Doctor Solar.  all the animation and sound was produced in the Amiga 2000 computer. Somehow, the interest was never there to follow up on the video promos, so this is all that was done.  I concentrated on trying get my Warrior in the Mist comic published (see the full story in Dime-A-Dozen #14} 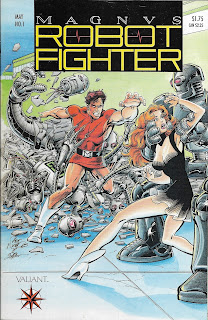 I also used the graphic images for a ashcan flipbooks.  I give several a couple of Valiant artists. 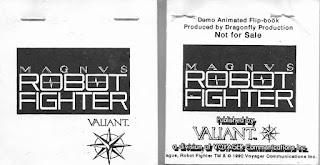 Here's the Solar: Man of the Atom I pulled the art from for the Solar promo. 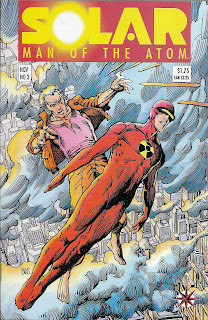 About the Dime-A-Dozen Projects:

This video is the latest installment of my Dime-A-Dozen Projects, so named from a conversation with creative friends of mine as we lamented that when we were working full-time for someone else, like Disney, Warner Bros , and Sony, we get these (in our minds) original million dollar ideas, that would, somehow, turn into "dime-a-dozen" ideas when we were out of work and on our own. I have tons of unfinished projects in the form of character sketches, incomplete written outlines, half drawn comic pages, and full illustrations. You get the idea, a "dime-a-dozen" idea. I'm feeling the need to catalog for my own sanity and for a simple record to leave my kids, and as I said above, along the way rekindle my creative juice and start drawing again. Enjoy.
Posted by Dennis J. Woodyard at Friday, December 27, 2019