[Dime-A-Dozen Projects is so named from a conversation with creative friends of mine as we lamented that when we were working full-time for someone else, we get these (in our minds) original "million dollar" ideas, that would, somehow, turn into "dime-a-dozen" ideas when we were out of work and on our own.]

Like many professional artists I spent many hours of my youth drawing for pleasure. Prior to entering high school this activity was considered a hobby. Then came the fateful day that my student guidance counselor asked "the" question, what profession do you want to pursue? My first choice was to be an astronaut, (remember we're talking the 60's here, the space race was running hot and heavy). But alas, a quick glance at my math grades killed that notion. So, I figured if I couldn't fly them, I could always draw them. A commercial art career was the logical and practical career choice. With that goal in mind, I graduated high school and entered the School of Visual Arts enrolling as a illustration major. In reality, my aim was to be a comic book artist.

Comic books provided me with one of the richest sources of inspiration. This occurring in the 60's, coincided with the rise of Marvel Comics and the glory days of Stan Lee, Jack Kirby and the other masters of that time. My old sketch books are full of original characters modeled after those great Marvel Age creations. Then one day, two new influences entered my artistic life. On the paperback book rack in the local newspaper and candy shop was a cover that just leaped at me, a dagger wielding, dark-haired barbarian atop a red cloaked ape. Thus, artist Frank Frazetta and Robert E. Howard's "Conan" gained a new and loyal fan. This truly "dynamic duo" not only provided endless visual and literary enjoyment but also inspiration.

The result of that inspiration and others was Joppa of Khad, Blackwolf.
Blackwolf would become my main original character. I drew up a map of his world and slowly developed the character in a series of sketchbook drawings and various spot illustrations. These spot illustrations proved to be pivotal in Blackwolf's development. At my very first comic convention in the summer of 1970, a Phil Seuling event, held at the Statler Hilton (now the Penta Hotel), in New York City, I placed two Blackwolf illustrations in the amateur art contest.  (the one at the top of the post, and the one below) 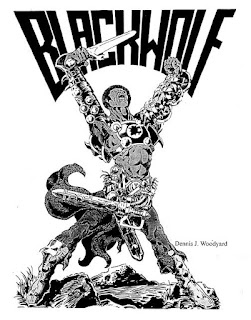 To my pleasant surprise, I took second place. So with added confidence I entered by second year of art school that fall. Unbeknownst to me, my artwork had attracted the interest of one of the professional guest judges.

That fall at another convention at the same hotel, a classmate told me Jim Steranko, the judge at the art show, was looking for the "artist" of Blackwolf. He had been unable to locate me because he had missed the awarding ceremony. Although skeptical, I presented myself to Steranko and pulled out my Blackwolf illustrations. My skepticism gave way to excitement as Steranko confirmed my classmate's story. But the best was yet to come. Steranko wanted to publish Blackwolf in an anthology he was planning under his Supergraphics Publication banner. Blackwolf would be featured in a book along with Steranko's "Talon" an sword and sorcery character he had in development, and work by a young Howie Chaykin.
At that time there was no complete Blackwolf story. But that following spring and summer with a co-writing assist from a friend`Charlie Hunt, I completed the pencils for the story "The Black Woods" featuring Joppa of Khad, Blackwolf. I mailed the finished pencils to Jim Steranko on Sept 27, 1971.

He loved them and say as much in several postcards. It was hard to contain my excitement. Was this the big break.

Excitement was replaced by disappointment as a year passed and the anthology did not appear any closer to being published. So, with a heavy heart, I asked for the return of my artwork. As a footnote, with the exception of a poster and some promotional illustrations Steranko's "Talon" remains unpublished. As did the anthology.

As for Blackwolf and my comic art ambitions, upon graduation from art school, I made several attempts to submit work to Marvel, but with no good results. So, I placed Blackwolf and other comic projects on the back burner and proceeded with my art career, with some modest success. I progressed to animated adventure shows. I designed characters and storyboarded for the "Adventures of the Galaxy Rangers".

During my tenure at Transcom, the producers of The Galaxy Rangers, I developed a renewed interest in comic art and comic books. This interest has lead to my wanting to produce Blackwolf and other projects. I dug out the old drawing and realized they still looked good.  I was determined to bring Blackwolf to the public and contribute to the comic art and animation fields which inspired me to pursue an art career in the first place.